11 April 2014 – While Toby Shaw was marked as one to watch, amazingly his first podium finish sees him claim the top spot at the first ACU OSET British National round at Howden Woods, West Yorkshire!   The Newark youngster set down his marker after the first lap, finishing with just seven marks lost.  His nearest competitor, George Hemingway dropped double that, on 14.

By comparison, Toby had a disastrous second lap, dropping 21, giving George an opportunity to pull it back.  A consistent ride saw another 14 dabs for George – neck and neck going in to the last lap!  It finished with Toby clear on 44 and George on 48.  Joining them on the podium was the ever consistent Jasper Fox.

Toby’s dad, David, said: “He’s had his friend, Jasper as his target to beat all year.  We ride regularly with George and Jasper, so we know just how good they both are.  It came as a complete surprise as we both thought we’d blown it after the second lap.  I’m delighted that all his hard work and many hours of practice have resulted in this amazing achievement.   He is chuffed to bits and so am I.”

There were 23 D-Class riders.  21 were riding OSETs.  Ian Smith, founder of the company, said; “Over the last five years there has been a complete transformation of the D-Class.  Entry numbers have more than tripled and the class is now the home of electric bikes.  All of top riders are graduates of the OSET Cup and ride and practice difficult obstacles and techniques frequently.”

Just missing out on the podium was Stanley Cubbon, from the Isle of Man - no doubt looking forward to his home leg!

In the D-Class Medium wheels Myles Hutchinson rode to his first national victory.  He was the clear winner of what proved to be a challenging course on the OSET 24.0.  His nearest competitor, Charlie Crossland was 45 marks behind, suggesting the title may be Myles’ to lose.

Dad Frazer, said: “I’m made up for Myles.  He rides his bike week in week out and he’ll be on it most evenings now it’s light.  He’s adjusted really well to the bigger bike.  He is strong enough and the bike is light enough, that he is able to manipulate and manoeuvre it well through the sections.  It means he can still apply all the techniques he learnt on the OSET 20.0 R.

British Champions, Henry Stephenson, Harry Hemingway, Harry Turner have been joined by OSET Cup alumni Dominic Horne in the C-Class medium wheels.  Dominic joined the two Harry’s on the podium, after riding his OSET 24.0 to third spot on the 50/50 course.

Ian added: “I’m delighted Dom has made the jump into this tough class effortlessly.  Myles and Dom have both demonstrated that the OSET 24.0 is a very competitive bike and we’re looking forward to being able to release them onto the UK market later this year.”

Kept under wraps all winter was Oliver Smith’s prototype OSET PR1.  Getting its first public airing away from UK shores at the Santigosa three day, where Oliver finished first, he enjoyed another podium in the B-Class, this time finishing third – just one dab behind second place, Daniel Slack.  The two boys, have always traded places with each other- and as this season starts it’s come as no surprise that old friendly rivalries have once again been revived.

Ian finished: “An OSET lock-out in the D-Class and podiums in every class where OSET were represented is a brilliant start to the season.  Bradford DMC produced and managed a really well run trial and I’d like to take the opportunity to say a huge thank you to the club for hosting at a new venue for so many riders and all the observers for giving up their time.  Luckily the promised rain and sleet stayed away until after the last rider had finished, which meant we were able to really enjoy Airedale and the picturesque setting. I’m also delighted for all the riders and looking forward to the double header in Devon.  See you there!”

While there were some big scores for some of the national newcomers – all of whom finished - the inevitable steep learning curve will see them steadily improve throughout the year as they get to grips with the standard needed to compete in the top half of the table.

Big thanks go to Colin Appleyard for their generosity in supplying trophies that now take pride of place on mantelpieces from Cornwall to Kirkcaldy.  The podium kids got the biggest shock of the day when the organisers from Bradford DMC turned and sprayed them all with bubbly.  A fitting end to a well organised trial.

In attendance were many of the Lampkin family, including Dougie as younger members rode the event.  The venue overlooked their hometown and a fitting one-minute round of applause was held prior to the start as a respectful gesture to acknowledge the passing of Martin Lampkin. 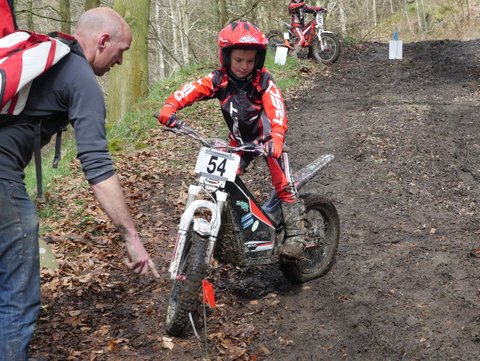